I’d previously only knew Shakira from ‘Hips don’t lie’ back in the late 00s. That song was never one of my favourites but I didn’t dislike it, it just wasn’t super on my radar. But from that song I thought I knew what Shakira’s deal was- latin dance pop. So when I got round to listening to this record, her forth, from the late 90’s I was pleasantly surprised.

The sound of this record is quite varied; there’s a bunch of horns on the opening track and a lot of the songs are built around a solid chassis of guitars and keys. Hell there’s even a harmonica solo on the second track Si Te Vas. The only place where electronics really get a look in is with the drums, which sometimes get super 90’s in a slightly unpleasant Vengaboys-esque manner. Gotta get the kids to dance somehow I guess… The album is about a third ballads and some of these are a bit soupy but the rest is a solid pop-rock-dance-latinx-crossover-smoosh. Shakira’s vocals on the whole album have a great amount of bite to them and she’s bends a lot of notes in an oddly bluesy way. Her actual vocal tone is sometimes quite biting, which means the songs have a lot of energy. There’s also a lot of emotion that comes across in her voice, which is useful as all of the songs are in Spanish, so it’s good be able pick up on the emotional contours of the songs for me at least; I don’t speak Spanish, I barely speak English.

But wait! There’s more…. There’s actually a psychedelic song on here! It’s halfway through the record, hovering at track 6 and its called Octavo dio…. And its great. Seriously go listen to it now. It’s got a lemony piano melody and a really cool windup into the chorus. Plus theres some mellotron and backwards piano on it. What’s not to love.

In conclusion, this record is definitely worth a listen. It has its ups and downs, but generally it’s a really fun experience. Would recommend.

I am afraid before attempting to truly review this album I (and the reader alike in time) will have to go through a crash course in Latin music genres 🙂 … Just look at its RYM page: Cumbia, Vallenato, Afro-Cuban Jazz, Latin Rap, Champeta… I could say this is the kind of music they call “exotic” and leave it at that, losing an ounce of self-respect for being so clueless. Though still, while being no expert, I’d have to content myself describing it very generally, hopefully actually doing the similarly-novice among the readers a small service…
The album starter “Tiene Sabor, Tiene Sazón“ is a jaunty, bouncing tune extremely well-suited for kicking off whatever festivities they have over in the Latin world (and I hear they have many), the feel and vibe naturally segueing into “Punkero Sonidero”.
“I Ron Man” is where I was suddenly taken aback: despite the name I could not divine aforehand it was a Latin music cover of Black Sabbath’s namesake track. Suffice it to say it works, and works well. Probably quite as well as a surreptitious slip into party people’s diet regimen to slowly prepare them for end-of-the-world doominess of the original, if they can’t take it firsthand.
“A female rapper rapping over the Latin equivalent of a klezmer” were my first impressions of “Suena”, the follow up track. “Locomotora Borracha” which literally translates into Spanish as “drunk locomotive” does indeed sound like a drunken motorcade through decorated streets in a Latin funland. Ignore the kind of electronic music the term IDM actually stands for today; “Remando” is what I’d describe as truly “intelligent dance music”: it’s easy on the ears yet still quite cerebral.
“Linda Mañana“ is another festive number with a bit of a dramatic flair, featuring vocals by someone anonymous, not a single word uttered by whom I can understand (well, I can understand “La Madonna”…) but can sense the dexterity of his wordplay.
“Ska Fuentes” is, as the name indicates, a ska – embellished with horns and reminiscent somewhat of classical-era Bollywood music (that being the only point of comparison I have). “3 Reyes de la Terapia” is the odd one out – throaty vocal effects over intermittent doses of… some kind of lambada music (a la Sun City Girls’ “The Shining Path”)? It seems that way to me, lol. “A creeping beat-box fever dream wreathed in dubby echo,” is what another site describes it as, and I don’t think I can top that description.
Epic horns reappear in “Bomba Trópica” and “Descarga Trópica” is replete with a Caribbean island feel. “Libya” features some exotic kind of horns/wind instruments. “Gaita Trópica” is back into happy-go-lucky party dance territory; “Curro Fuentes” is, from what I understand, a “big-band cumbia” … to my naive ears it just sounds like a soaring melange of a large number of Latin musicians doing their thing, and very competently.
“Rap Maya” is again a strange kind of rap over some exotic accordions or maybe reed-pipes that has a very “snake-charming” feel to it. Up next is “Dos Lucecitas”, Latin-jazzy with female vocals, followed by “Cumbia Especial”, a beautiful piece (cumbia again, but no big-band setting this time) which reminds me a bit of Cat Mother & The All Night Newsboys’ “Marie”.
“Donde Suena el Bombo” made me feel proud because I could immediately detect one of the the main instruments – a marimba. It has a marching rhythm and the dance vibes that are ubiquitous on the album. The album ends with “Swing de Gillian”, a somewhat sombre piece that sounds like an elegy to more an end of a good party than a human being, given its setting and sound.
Because all good things must eventually come to an end. Unless the next time arrives for popping out this charming piece of Latin exotica and having some fun again. 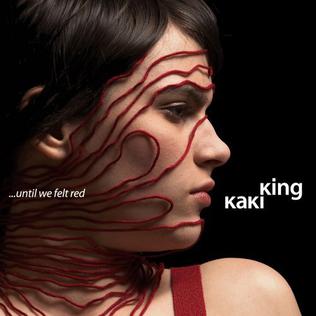 Pretty music with pretty vocals, some of which is really touching, if a bit commonplace.
Much of the album is acoustic folk with ethereal vocals, like a less apocalyptic Marissa Nadler, with varying amounts of post-rock.
Standout tracks for me (that stand out from the rest because they try to be something different) are …Until We Felt Red, jazzy instrumental post-rock with the unusual time signatures and sludgy guitars with weird scratchy textures; “These Are The Armies Of The Tyrannized”, that actually goes into a hard rock groove midway; the beautifully atmospheric “Soft Shoulder”, which could be something taken straight from Opeth’s Damnation album; and “Gay Sons Of Lesbian Mothers”, which, strange title aside, is like the album highlight on Spotify, being the most streamed track off this album — it sounds like she tried to made a chill-dance track while remaining within the sensibilities of atmospheric folk.
From what I understand, this album has something of a lack of critical clout, but there’s certainly nothing dislikable here for me. In fact, when this album get evocative, it gets remarkable and conjures lush, beautiful moods on a deeply sensitive level. The only real problem is that it contains glowing embers of beauty smouldering amidst more passable material.

This is definitely an interesting album, it has a rich sound but is not overthought. It has a very soundtrack vibe onto it, I feel it could be part of the classic formula of the good old American film with great music that makes the movie so much better whilst perfectly standing for itself as nice tunes to listen on the car. It’s an easy listener, there are some nice guitar riffs and vocals, nothing too fancy, but it just goes very well together. It also has a very contemporary sound; it uses sampling in a very smart way considering the foundation of the album is good old blues music.
Maybe I should give some important contextual information before proceeding with more comments. First of all, this album is said to belong to the genre of punk blues, a style which I was not familiar of. It surely is nice, it’s a combination of old and new sounds put together in odd ways, it sounds a lot like Beck to me. This album is the sixth of the Jon Spencer Blues Explosion, a band of New York with modest success throughout the 90’s. Consulting in various interviews on the recording and the production on this particular album, I saw the members said most of the album was made just like the others: they composed nice rock n’ roll tracks with dirty sounds. The difference of this piece was the influence of producers who mixed and remixed the tracks which gives the album the distinctive modern sound I was mentioning before.
Although it sounds like a really good rock n’ roll album, it has very noisy moments, and I’m talking about 90’s rock. I’m not really fond of those kinds of experiments, what I find most pleasurable of this album is the simplicity of the sounds which don’t necessarily translate into simple tracks. The sound of this pieces is very authentic, but it’s not built on the expertise of a single musician but rather on the chemistry of the band. It is a very good listen.