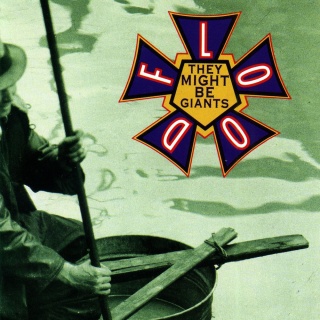 This is a record about the small things but the things that are also perversely the most important things in the world-like particles!
First a bit of background, ‘They Might be Giants’ (TMBG), ‘Flood’ is their third album and their first for a major label, it’s also probably their most well known and, full admission, the only album of theirs that I’ve heard all the way through. There were only two guys in TMBG at this point John Linsell and John Flansburgh, and they split most of the instruments between them with a few parts played by session musicians. Notably all the percussion on this album is provided by various drum machines. The sound picture is coloured by various synths and organs which combined with the drum machine, lends some of album the feel of an early Magnetic Fields LP or a less frantic Devo. Not that the album is monochromatic, some songs such as ‘Your Racist Friend’ and the closing track ‘Road Movie to Berlin’ tip the balance more strongly towards guitars. A lot of the tracks feature prominent accordion melodies and this combined with the tight songwriting lends the album a good sense of diversity. Binding together the various musical threads on this album is an atmosphere of DIY experimentation. It doesn’t necessarily feel like a band record, more like, perhaps, a group of intelligent (but emotional) scientists piecing together songs together using diagrams, test tubes and a wide range of slightly archaic instruments.
What stops the album turning into a piece of experimental art musik like Throbbing Gristle or Coil is that musically this album also harks back to simpler forms of American music from the 50’s, 60’s and in some cases even earlier. Songs by Carol King and the various Rogers, Hammersteins and Schopenhauers who seemingly wrote all the songs back in this halcyon era are often brought to mind when listening to many of these tracks. By that I mean the songs have simple and catchy melodies that nevertheless bound to formally conservative structures. Verses, choruses and middle eights are all well in evidence here. TMBG even include a 50’s cover ‘Istanbul’ that makes the connection to older forms of music explicit. This combination of high quality songwriting in the ‘classic’ mould combined with somewhat modernistic and unorthodox arrangements helps create a quirky but overall charming aesthetic that draws you in even as it surprises you. Much of this surprise is conveyed by the lyrics.
Lyrically, the songs on this album address potentially trivial subjects but these themes mask deeper and more essential emotions that come to the fore after repeated listens. ‘Birdhouse in Your Soul’ is both about a night light and sung from the perspective of the object itself. Other songs on the album are about being reincarnated as a bag of groceries and the need to wear prosthetic foreheads. When first listening to this album (at least for me) I didn’t pay too much attention to the lyrics but I really enjoyed the melodies and the arrangements. After listening a few times I came to notice the quirky subject matter and I was amused. However the problem with ‘funny lyrics’ is that they often they are only funny or interesting in the short term and after that rapidly become tedious (Weird Al et. al.). With these lyrics it’s the fact that they’re often used as cover to talk about some deeper emotional stuff. For example ‘Birdhouse’ is really a plea for companionship and ‘Dead’ is a song about deep regret. Obviously the songs are also funny and quirky but if you scratch through the surface there’s often real emotional resonance buried inside.
Take for instance ‘Particle Man’, which might be the signature song on this record. On first listen it’s easy to get caught up in the bouncy accordion and child like references to a cast of characters that wouldn’t be out of place on a Nickleodeon Cartoon. But have a read of this verse:
Person man, person man
Hit on the head with a frying pan
Lives his life in a garbage can
Person man
Is he depressed or is he a mess?
Does he feel totally worthless?
Who came up with person man?
Degraded man, person man
The song is actually about the vacuity of existence in modern late capitalist society and how it leads an unsatisfyible sense of longing and questioning within people at the bottom of the economic pile. Adorno would be proud.
In conclusion this album will worm its way into your head like a tiny particle and then beat you over the head like an angry triangle.