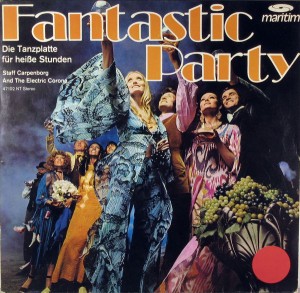 Staff Carpenborg and the Electric Corona would seem to be a musical collective designed to prompt a kind of Residents-style mythologization amongst enthusiasts of bizarro cult music, though it is a fairly safe bet that this resulted more from circumstance than calculation.  Apparently the brainchild of a German musician named Paul Bucher active in the late 60’s and early 70’s, the Electric Corona’s one and only LP Fantastic Party was released in 1970 to little fanfare and seemed fated for oblivion if not for the peculiar fate of a highly influential and stylistically diverse contemporaneous musical movement.  Of course, I am referring to Krautrock, a loose collection of German rock musicians active during the late 1960’s and 70’s whose decidedly grim and angular approach to rock music would end up influencing nearly all popular music with an experimental bent that would come after. Exploring the more obscure corners of this historically important musical movement has, inevitably, unearthed the occasional forgotten gem.

Can, Kraftwerk, Faust, and Amon Duul are probably some of the more well-known and well-regarded musical acts associated with the krautrock scene, and each one of these groups would launch their experiments from a somewhat different stylistic musical base, with some preferring jazz, others blues, and others whatever the then-current electronic aural technologies could provide.  Fantastic Party is very much a jazz-flavored oddity that gives one the impression that Captain Beefheart’s Magic Band (but not the Beefster himself) had decided to hook up with Third-era Soft Machine to throw a party at a haunted house with a drunk Ray Manzarek. I’ve encountered a review (or two) on the internet that suggests the title and album artwork are something of a deception, as they imply a good-time party atmosphere that any Eurovision enthusiast would dig, but instead the music they accompany is a dissonant, creepy, and highly experimental, collection of jazz fusion stylings from a bunch of Frank Zappa types who never bothered to develop a comparable sense of humor and seem to be haunted by an abstract post-war middle-European malaise.  I would say the notion that the title is inappropriate is something of a half-truth. Fantastic Party is a highly energetic album that does, indeed, give the impression of a party, but it is a fantastic party in the second-most common sense of that word; it is a party that defies credulity, seems distant from conventional reality, and alienated from ordinary human experience.

Let’s break this down, shall we?

“All Men Should be Brothers of Ludwig” starts things out with a deliciously deceptive beginning; after the fake-out sample from Beethoven’s Fifth, a creepy film-noir bass line rudely intrudes on the listener’s senses and fights a compelling duel with a very Doors-like organ part, establishing a haunted and haunting atmosphere from the get-go.  The almost mechanical beat provided by a methodically beaten tambourine serves as something of a rhythmic anchor to a musical proceeding that seems in danger of falling apart at any second, very much in the manner of a Trout Mask-era Beefheart tune, or really, any of the more audacious jazz fusion or Krautrock compositions. The bass would not be out of place on a Portishead song.  “The Every Day’s Way Down To The Suburbs” provides a rare number featuring vocals, and seems to exist at an intersection between a cut from Zappa’s Uncle Meat (complete with sassy satirical lyrics that would come off as sarcastic if they weren’t so bizarre) and the third Soft Machine album. “Lightning Fires, Burning Sorrows” is propelled by a driving, stuttering- I’m tempted to say ‘neurotic’- bass line and maddening, repetitive, metallic tinkering percussion, which contrasts with bizarrely beautiful organ noises that drift in and out of the mix.  “Swing Low If Like to Do” is probably the most Soft Machine-esque track, with a powerful, if somewhat frustratingly-mixed drum part that anchors a feast of almost-but-not-quite dissonant instrumentation. The organ part seems to belong to a different song, and these fuzzed-out, unidentifiable, distorted electronic noises provide an infectious groove while the electric guitar fills out the mix with this incredibly high-pitched, ‘chiming’ tone that seems to emulate an exceptionally shrill songbird that has lost its sense of rhythm.

“Stainy Heavy Needles” is another bass-driven tune with distant, cymbal-heavy drums that seem to be provided by a drummer intent on playing fills a thousand times more complex than strictly necessary.  Meanwhile, incessant hand-claps provide a bit of effective Chinese-water torture percussion (and are much more prominent in the mix) while an eerie, and seemingly improvised, flute part twitters like that aforementioned rhythm-deprived neurotic bird.  “P.A.R.T.Y.” (aka, “Have fun guessing the probably-non-existent acronym”) has probably the most complex bass part on the album and eerie Suzuki-esque Can vocal wailings that complement the haunted-house organ, even if they maddeningly never congeal into a proper, angular Suzuki-esque vocal melody.  In fact, they seem to play a compelling, call-and-response game with the jagged electric guitar fills. “Let the Thing Comin’ Up” is another vocal track that relegates the vocals to a supporting role; as usual, an appropriately hypnotic bass line is the main event. The completely indecipherable vocal ejaculations seem to derive from a combination of a possessed evangelical preacher and an eccentric German’s idea of what an ‘African tribal chant’ is supposed to sound like.  Bongos and that same incessant, metallic chiming from earlier provide the percussion, and the whole affair perhaps best exemplifies the album’s haunted party aesthetic. “Shummy Poor Clessford Idea In Troody Tapestry Noodles” has an insistent, repetitive guitar line that seems to be filling the prominent groove role usually reserved for the bass (not that the bass is slacking off on this track), and the jazziest drum parts yet. A second, seemingly improvised guitar sporadically pops up and seems to whither under the assault of the main groove, which has a driving power comparable to Can’s “Mother Sky.”  This served as the album closer on the original vinyl pressing, but the cd reissue provides the listener with a memorable ditty called “Afro Rock,” and it lives up to its title. It’s probably the funkiest number on here, opening with a hilarious but still somehow eerie, ghostly vocal ejaculation before settling into a funky groove ably complemented by some smooth, and strangely mournful, saxophone wailings, and some nice Funkadelic guitar.

Really, I have been trying to avoid the adjective ‘trippy’ while writing this review, as it is paradoxically too appropriate to be interesting and just inappropriate enough to be misleading.  Inasmuch as Fantastic Party can be said to be psychedelic, it is the psychedelia of genuine madness, not chemical hallucinogens. As I’ve already hinted, contemporaneous krautrock, the jazzier side of Zappa and Soft Machine, and Beefheart’s Trout Mask Replica are the precedents and analogues that most inform the album’s style, and like those works Fantastic Party derives (or at least seems to derive) its tripped out sensibility from the haunted corners of the human mind.  The music is weird because the people who made it had a deep psychological acquaintance with weirdness, and were not merely experimenting with drugs or responding to the vagaries of a cultural zeitgeist.