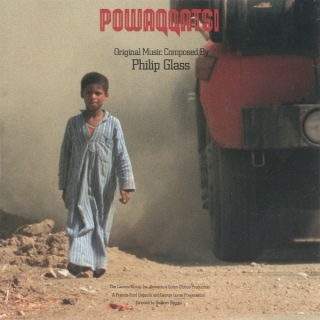 “Powaqqatsi”, which means “Life in transformation” in Hopi, is the second of 3 “qatsi” films, for which Philip Glass scored and recorded the soundtrack. I am not familiar with the other two. I vaguely recollect seeing one of the 3 movies, and I THINK it was this one. The movie presents in a non-narrative manner without dialog several scenes of events around the world. I honestly don’t remember much more, but it has no bearing on the appreciation of this album. It definitely sounds like a movie soundtrack, but stands up very well as a work on its own. I am familiar with some, but not all, of Glass’s work – his piano etudes, the Low and Heroes Symphonies and “Knee Play” segments from “Einstein on the Beach”, as well as other scattered pieces I’ve heard performed over the years. The basic elements of Glass’s general style are very much identifiable in this music, but this is “big screen” Philip Glass. It uses Minimalist elements in its structure – the subtly-changing repeating simple lines that weave patterns with each other, but it certainly is not “minimalist” in its arrangements. Most pieces are quite dense with orchestra, percussion, choirs or other vocal ensembles, and a very wide range of different “ethnic” musical influences. This is kind of Glass’s “World Music” work, reflecting the themes of the movie. The sound alternately evokes Brazil, India, China, and the Middle East without necessarily directly quoting their musical styles. The obvious exception is the vocal (in Arabic, I assume) on “From Egypt”. Sometimes the music gradually transitions, while other times it jump cuts abruptly. Dense, bombastic (in a good way) pieces like “Caught” contrast with sparser & gentler passages.
In a nutshell, it’s a definite thumbs up for this one. The “CLASSICAL” and “MINIMALIST” labels should not scare away listeners. Glass’s work (as far as I know it) is very much tonal, and this album is quite accessible for listeners who are somewhat adventurous and interested in world music.
This review is also posted on Amazon here.

I’m proposing to my girlfriend these days. Running wild to have a diamond for her on time. Erasing any chances of making a serious review of this album.
She doesn’t know, so this words will not be shown to her (making all of this pointless, as that was the whole reason why I got into this review-making business in the first place).
The situation is quite ironic, as you could perfectly argue that I am a bloody Diamond Dog right now, and this reinforces the iconic role of partners in this review club, suckers of time.
Being the diamond dog that I am (young girl, they call me that), I naturally liked this album.
Somehow interesting statements that I feel inclined to make: Bowie had mastered his more Rollings-like sound in the opening track, and I can see the founding bases of punk in others. Well, the whole record is something that could be based on the Mad Max universe.
Additionally, Mike Garson keeps embellishing tremendously every song in which he participates.
Wait, I said that I liked this album? I was a little excited about my connection to the title, but well, I would like to clarify that this album is in no way at the same height of brilliance as in Bowie’s previous (or future) efforts.
Regardless, “Rebel Rebel” is a classic Bowie tune and has one of the catchiest guitar riffs of the last century. Or every other century, really. Guitar riffs were not very popular in the Renaissance.

Not only Semiramis was a prog rock band (genre that we associate with 30+ years old music virtuosos), but it also it was a teenager band. 15 year-old kids! See Backstreet Boys? You could have done better, no more excuses, go somewhere and get blisters on your fingers instead… Too late.
But well, back then in the early 70s you did this kind of thing. And they only released an album, talk about “Better to burn out”: One album may be enough if you do it good. And this is a darn fine album, with great vocals, Early Genesis winks (“La Bottega del Rigattiere”, gorgeous), circuses touches (Geez it’s so good), cute jazz flourishes and power chords: Early Crimson? Early Deep Purple? Not sure, this band is quite unique in the end.
“Luna Park” has those breaks with acoustic guitar, bits of pure melodic hard rock, and then it turns into a mighty keyboard attack like a million rabid mosquitos. “Uno Zoo di Vetro” becomes a movie soundtrack piece out of nowhere, then disappears. “Dietro una porta di carta” has a beautiful melody, “Clown” betrays the Circus inspiration of this album.
It all works fantastic, it’s a fun, engaging record clearly made by enthusiasts, and it deserves to be listened many times, so go and hunt for the vinyl, in Italy some 23u$s (Geez), that album cover is so fantastic that you may want a second one to hang from a wall. A Prog minor (because they were teens?) masterpiece. A pleasure indeed.
Time to listen to some Premiata Forneria Marconi, I think.
Peace and Out!

I had never actually listened to The Kinks before outside of a few isolated songs, so I was excited to do my first full album by them. Unfortunately, I think I’m forced to agree with the mostly negative reception it’s gotten.
The production is uniformly wonderful, which is a big plus, and musically a lot of the songs are pleasing enough. If there’s a plot to this rock opera, however, I can’t see one. Worse yet, the lyrics are utterly grating. Davies wants to be a cutting satirist but he paints with far too broad a brush and far too simple a sentiment to come off as anything other than smarmy a lot of the time. Where Randy Newman’s satire is horrifyingly cruel because it’s laced with empathy and pity, Davies clearly considers himself above most of the people he’s describing and treats them as such. It’s not amusing, it’s obnoxious.
As said above, I mildly enjoyed a good deal of the album’s melodies, but they can’t rescue it from the lyrics for me. Having seen that this is generally considered the beginning of the end for the band, though, it won’t deter me from eventually seeking out their earlier work.

I’m always down for post-punk, so this album was a good recommendation for me. I’m so married to that school of sound that I knew that I’d be keeping this album for my collection after only listening to the first three tracks.
The sound here is reminiscent of Ian Dury, in that they’re a very tight funk-influenced band backing up an eccentric-sounding vocalist. The music is less diverse and inventive than Dury’s, however. Nonetheless, their music still has a certain cleverness to it that makes it attractive to me.
The English language lyrics were unexpected, but are a pleasant surprise. Considering that and the accessible (by the standards of the time) sound, it’s a wonder that these guys didn’t make any waves anywhere outside of Belgium. I fully expect them to become more well-known on an international scale after one of the members dies, like what happened with Soda Stereo (who I still have to listen to in full sometime).

Dolly mixture is a British confection consisting of a variety of multi-coloured fondant shapes such as cubes and cylinders with subtle flavorings. The mixture consists of small soft sweets and sugar-coated jellies.
Cylinders! Jelly! Accordingly, one should expect something truly Satanic from a group named “Dolly Mixture”.
Satanism in this case comes in a form of the three females singing lalala lalala lalala lalala for an hour in the “I am unaware of what has happened to Anne Frank in that stupid Auschwitz” style, an anesthetic given to you by a mad dentist, the Demonstration Tapes where Demonstration stands for what it actually is, for the Ritual rather than begging for acceptance, the acceptance never needed since the moment you have turned this Thing on – it’s a home invasion, a sadistic and not, actually, very good Knock Knock, the girls never caring for YOU, proceeding with their own plan as soon as you let them in.
The plan is to sing lalala lalala for an hour having named the album Demonstration Tapes, having named the group by a clever name, a confirmation of the Velvet Underground Big Bang theory, a melodic variant of the Zabriskie Point Blow Up scene.
I have switched them off after some 30 minutes because I pitied the Nigerian girls who are deprived of education by the evil fanatics of maybe Ethiopia because Madonna is too far away to save them and so they cannot sing as those ladies from Sugarcubes do – otherwise we would have had lalala lalala lalala from Nigeria and from all over the world non-stop because this world has been finished and has been prescribed the anesthetic.
Sing your songs sweet sirens of Capitalism, Dollies Dearest, and burn Nicolas Cage in the end of each of your shows. It’s a pity you have not made a million more albums, but one can eat only so many jelly-coated cylinders of Cthulhu before he is driven into the abyss of the mountains of madness.
Though I’m going to sue the company for the flavoring being not so subtle.

Review by: Roland Bruynesteyn
Album assigned by: Nina A

Keb’ Mo’, or Kevin Moore, as his mother knows him, hit the stage in 1994 with this, his debut album. It’s mostly an acoustic blues album. Keb’ has a nice deep voice and knows how to play the guitar. His voice and the album sound quite a bit like some earlier Taj Mahal albums.
“Come On in My Kitchen” and “Kindhearted Woman Blues” are Robert Johnson covers, the others are (co-)written by Keb’. I won’t describe all the songs, but give you a feeling of what you’ll find here instead.
A lot of the songs are solo performances, with Keb’ accompanying himself on guitar, with a little harmonica thrown in for good measure. “Every Morning” and “Love Blues” illustrate this perfectly. In some songs his guitar sounds a bit like a dobro, a nice touch.
Other songs, while still acoustic are less bluesy in sound and overall atmosphere. In “Victims of Comfort” and “Anybody Seen My Girl” for instance, he uses his voice to great effect but they do sound like nice Eric Clapton pop songs circa Reptile. The same goes for “City Boy”, although that mostly features a piano rather than guitars.
Some songs, mostly full band performances, sound happy, although still steeped in the blues (“Tell Everybody I Know” and “Angelina” are good examples).
“Don’t Try to Explain” is totally different: it’s more keyboard based (both piano and organ) and could have been sung great by both Greg Allman or Steve Winwood. Nice somewhat gospel like song, but it does not really fit the album (or it adds to the variety…).
Just like Robert Cray would move from (rather slick) blues albums into a more soul and r’n’b  direction, Keb’ would move in a more singer-songwriter direction on later albums (including collaborations with Jackson Browne, for instance). But he sure can write a song, he can play the guitar and he has a nice, somewhat melancholic voice. His debut album is a nice modern blues album and as such I strongly recommend it.