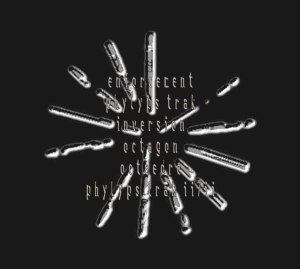 After three minutes of listening to Enforcement, the first track on Basic Channel’s BCD 2, I could have made up my mind: this is shitty noise, it’s not even music. I could write a few paragraphs focusing on why I do not like it. I could briefly discuss individual tracks and I could single out some differences between them. I could philosophize about whether this is music at all. I could do all that and the end result would be predictable: Roland does not like it because he’s a dad rocker at heart and this is not dad rock. This review would be useless, then.

So I decided to do something different: I propose to answer the question why somebody would like this. I make this a three-pronged question:

Don’t all tracks sound the same?

Strange question, Roland. Having a signature sound does not seem to bother you when listening to J.J. Cale, Phish or the Allman Brothers Band. In a sense, it’s what makes one a fan of a certain group in the first place. But to answer the question, no, not really. For instance, Phylyps Trak sounds way more focused on just bass and percussion than Enforcement. Inversion is colored (some would say: dominated) by a Riders On The Storm-type of rain sounds in the back.

There’s not much development going on in any particular song, is there?

There you may be on to something, Roland. Generally, the tracks take their time to slowly develop. It is strongly loop based. But that’s not much of a criticism, is it? You, as a lover of all things krautrock, trancy stuff such as Kitaro/Tangerine Dream/JM Jarre and minimal music such as Philip Glass and Simeon ten Holt should not only respect this, you should love it! The attraction is not so much caused by something as vulgar as a simple, catchy, memorable hook :), but it is indeed way more sophisticated. By elaborating on a theme, slowly adding little variations, the rhythm and the continuity become the hook, sort of.

Why is this actually good music (rather than ‘bad music’ or ‘good sounds and grooves’)?

Well, it IS also ‘good sounds and grooves’, as this is more or less their chosen genre or schtick. And, as music, it has to be judged on those terms, not on some preconceived notion of good music the listener might have.

If a lover of thrillers judges a poem, you’d not expect him to judge the poem as a shitty thriller but to judge it as fiction. This is ambient techno, rather than dad rock. As dad rock, this pretty much sucks, but that’s not really the point. If one ONLY likes dad rock, this will suck. But that really only reflects poorly on the listener that listens with closed ears.

In short: this music may not be hummable or great to sing along to, but it is comforting nonetheless. As a modern-day type of serial music it succeeds. You probably won’t listen to this over and over again on a daily basis, but it is far more satisfying and indeed, rewarding, than some other genres such as punk or heavy metal.

It is less psychedelic, and less melodic than, say, Ozric Tentacles, but in a way, it is more subtle. The slowly, but constantly evolving instrumentation (whether it’s some synth loop, some sound effect or some rhythmic variation) does not keep you anticipating their next move on your toes, but certainly with some expectation to be surprised and delighted.

We will have to believe Tristan if he claims that this is one of the highlights in this genre. As such, I can honestly recommend this to any open-minded music lover with a comprehensive collection. In my collection, it would proudly sit between BBM and the Beach Boys…