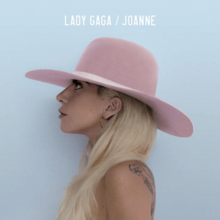 Bleh. What a waste.

(No, I’m not reviewing Cheek to Cheek. Sod off.)

If this album proves one thing, it’s that I was wrong to suspect that Gaga’s reservoir of raw melodic talent had emptied entirely. Naw, she’s still got it, and it’s actually present on this album in abundance. I dunno where it went on Artpop, but it’s back now, and most of the songs on this album centre around at least one pretty memorable tune. So, that’s a good thing, right? All is not lost?

Mmmm… nah. Gaga’s talent for writing catchy melodies is most certainly back, but it’s been misapplied. All those dense, clever tunes she used to write, with their lovely development and evolving structure, are gone, and what we’ve got here instead is a big ol’ pile of vast, soaring arena music. Just about every hook on here is huge, slow, ponderous and spacey, and it’s all delivered with so much uncontrolled vocal power that it often starts to become a little grating after a while. Take the opener, for example: a perfectly competent, entirely decent piece of soft faux-indie arena pop-rock sung as if it were some sort of U2 ballad about Martin Luther King, developing as predictably as anything you can imagine from its plaintive verses to its big ol’ drawn-out-syllables hook. It’s perfectly enjoyable if you’re in the mood, but it’s rather tragically typical, sounding like just the sort of dime-a-dozen landfill indie that’s been filling middle class nerdy-white-girl playlists since the turn of the decade. I kinda like the sheer melodrama of the bridge, I guess, but I could see it coming from a mile away. I like Gaga best when she keeps me guessing, and there ain’t a single moment of that on this album.

If anything, the most baffling thing about this album is the general consensus among the uninformed that it can be considered “country”, presumably something to do with all the acoustic guitars and that big pink hat on the cover. There’s nothing country about it at all, of course, with the possible exception of “Sinner’s Prayer”, which at least has some vague ghost of the twangy warmth one can usually find in the best country. The fingerpicked guitar style is still more folk, though, and the actual songwriting is mostly just the same as the rest of the acoustic tracks on this album: ballad-pop, genreless and formless except in the most general possible sense, the sort of music recorded just as easily by Adele or Keane as by Lady Antebellum. It’s a little better than most of that dreck, ‘cos Gaga is still a better melodist than most, but the melodies just aren’t interesting anymore, you know? Like, nobody could deny that “Million Reasons” is extremely catchy, but it’s just so much dumber than her catchy songs used to be. The hook is vast, soaring, huge, sweeping, etc. etc., and impossible to forget the moment you first hear it – but it’s not clever. It’s the sound of a supremely talented melodist operating on autopilot, defaulting to the path of least resistence and creating the only song in her entire career I’d be willing to call completely generic.

The sentiments get pretty generic, too. Gaga’s never been a good lyricist, but the first verse on “Come to Mama” may be the most offensive thing she’s ever written, dipping far below her usual levels and dragging us to the dread realms of white savior-pop. “Everybody’s got to love each other/ Stop throwin’ stones at your sisters and your brothers/ Man, it wasn’t that long ago we were all living in the jungle/ So why do we gotta put each other down/ When there’s more than enough love to g-g-go around?”, she simpers, doing her best to ruin what little goodwill may be conferred by the perfunctory funk brass-band arrangements one finds elsewhere in the song. “Hey Girl” is a duet with eternal wailer Florence, fresh from The Machine, and it’s a meeting of two such unstoppable freight-train voices that it’s actually almost likeable until you hit the dimestore feminism lyrics. “Angel Down”, meanwhile, closes the album out on perhaps the most trite note possible, with Gaga donning her – gulp – political hat, letting loose with a string of such rancid clichés that I nearly vomit every time I hear it. “I’m a believer, it’s chaos/ Where are our leaders? Oh, oh, oh!” she sings pathetically, doing her very best Whitney Houston impression in the worst possible way. All these songs have incredibly, ridiculously catchy arena-pop hooks that I can easily imagine anybody singing along to at a live show, but they’re all basically the same as each other and none of them have an ounce of intelligence anywhere in their bodies. The only little acoustic ballad on the whole album I properly like is the title track, which drops all the lyrical pretense in favour of a simple lament for one of Gaga’s long-dead relations and does nothing to ruin the fairly pleasant melody and fingerpicking that accompany it. It’s quite lovely, but it’s not exactly one of her best tracks, and she’s hardly the best to ever do this kind of music. Still, at least she’s better at it than Mumford & Sons, eh?

The other songs on this record – and we’ve blown through more than half of them already – have various ideas that set them apart from this grey mess, but not all of them are good ones. “Dancin’ in Circles” is, once again, catchy as anything, but it’s also very much a superficial imitation of the absolute most basic possible surface traits of reggae or ska music, lacking any sort of groove or funk to match its lyrics (“Tap down those boots while I beat around/Let’s funk downtown”). “Perfect Illusion” is this weird, ridiculously oversung glam rock pastiche, saddled with the absolute dumbest verse melody on the album (which is seriously saying a lot) and laden with a totally, hilariously unearned key change that brings to mind the worst excesses of Eurovision idiot-pop. I can, in the right frame of mind, just about enjoy most of the tracks on this album on some base level, but “Perfect Illusion” really is total shit, and I can’t recall a single moment where I ever enjoyed any of it. Gaga’s made a lot of bad songs, but this seriously might be her worst. And it was the lead single! See what I mean about bad ideas?

The remaining two songs are the only ones that come close to displaying the level of talent I know Gaga is capable of, and it’s really only a dim reflection. “A-YO” is classified as “country-pop” by the idiots over on Wikipedia, but it’s really more of an indie pop song with perhaps vague, ill-defined influences from a nebulously distant era of American popular music, sounding not really much like country, rock ‘n’ roll or r’n’b but kind of like someone heard all those styles described to them by a millennial who’d read about them on George Starostin’s old page and decided to make a song based on that information. It’s dancey, catchy and fun, even if Gaga’s oversinging gets grating, and I can’t deny that the end result of this pastiche is something kinda unique among the pop radio hits of the day. “John Wayne”, meanwhile, is the closest thing you’ll find to Gaga’s old bop style on the album, and it might be one of the better tracks on Artpop if you just replaced all the live instruments with expensive synths. The rock influence is vague enough to, once again, accidentally create something a little unique, not quite rock enough to be called pop-rock but with enough ghosts of rock attitude to make the whole thing sound a little more hard-edged than usual. It’s still not perfect – the hook feels a little lazy, what with those little wordless, distorted vocals taking the place of Gaga’s usual well-developed melodies – but it’s at least kind of a successful banger with a nice build in the prechorus, which is a trick one might almost have thought Gaga had forgotten entirely if one judged by the other tracks on the album.

And, uh… that’s it. Man, what a disappointment, huh? I can’t rate this too low, ‘cos every song on here really is very catchy, but this is an album that feels very much as if Gaga is suppressing herself in pursuit of some great social ideal she has no business pursuing. The idea that acoustic ballads are the definition of authenticity is, of course, a silly one, and I’d actually say this feels like possibly the least authentic Gaga record yet, save maybe for the lowest nadirs on The Fame. Trying to slot any of these tracks onto best-of-Gaga playlists is a bizarrely futile endeavor, not just because the instrumentation is so different from her usual but because the melodic style seems almost like that of another artist, moonlighting under the Gaga name but not really representing her soul. The cover, at least, is great – probably the best Gaga album cover ever, actually, at least so far – but, alas, that’s the only hyperbole I can heap upon this album, which isn’t even interesting enough to claim the coveted title of worst Gaga album. Man, is there anything more depressing than the sight of an interesting artist making an uninteresting album? Well, I dunno, maybe…