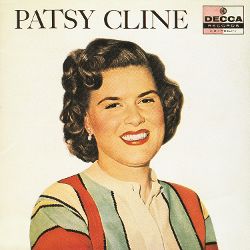 Misery itself. As beautiful as it gets.

“It’s nice to know that there’s music that isn’t rooted in misery.”

I plan to review a lot of country artists in my time here, but I’m not entirely sure how I’m gonna go about it. Country artists are a prolific bunch, and the legends tend to have discographies that stretch off into distant solar systems. I’ll come up with a way of reviewing them in depth one day, but in the meantime I’ll start with Patsy Cline, who had the decency to die in a plane crash after releasing only three albums.

Now, I’m not the most knowledgeable bloke when it comes to this era of music. I know, however, that this album isn’t what you might call pure country. It’s got that cosmopolitan Nashville style, pulling all sorts of different influences into a great country-shaped melting pot that bears a striking resemblance to just about every form of American popular music of the time without actually committing fully to being any of them. That sounds like a sneering insult, but it’s not, because the end result isn’t the beige pile of mud one might usually expect from such a collection of distilled references. Instead, all the styles ultimately end up subservient to country music’s peculiar lightweight gorgeousness, where all the individual instruments seem to disappear into a shimmering, ephemeral cloud of divine beauty, annihilating the musical ego entirely as the individual musicians disappear into the collective. Atop this glowing fog resides the heartbreak of Patsy Cline, screamed and wailed out with the power of a thousand suns. This dichotomy between the divinely perfect and the brokenly human is what motivates much of my favourite country music, and this album is as lovely a representation of it as you will find anywhere.

Across this album’s runtime – less than half an hour, as was normal in country music (and, indeed, much other music) of the time – there are two components that remain constant, undergirding all the tracks and binding the influences together. The first, most famously, is Mrs. Cline’s gorgeous, sonorous voice, resonant with overwhelming emotion and occasionally inflected with just a little bit of ugly phlegm to get the point across. The second, more subtly, is the backing vocals of The Anita Kerr Singers, present (unless my memory doth deceive me) on even the roughest, bluesiest tracks here. That serves to smooth down the edges of some of the grittier influences here, making sure that even the r&b riffs of “In Care For The Blues” and the swingy horns of “Too Many Secrets” ultimately sound as if they are in the service of some omnibenevolent being. This goes both ways, though. The opener, “That Wonderful Someone”, is ostensibly a plain-and-simple worship song for that aforementioned omnibenevolent being, and the softly clean instrumentation sounds as tranquil and bright as a clear mountain stream, but Patsy’s voice still peals across the shimmering waters like a doleful horn, reminding us all – I guess – of the perpetual fallen sinfulness of humanity, tragically heartbroken even as surrounded by the natural wonders erected by that wonderful someone.

I don’t know how genuine her pain was – I’ve not properly read up on her biography – but it certainly sounds real. I’ve never heard anyone wail quite as desperately as she does on “Don’t Ever Leave Me Again”, which may contain the most wince-inducingly convincing scream (so to speak) of the words “I feel like dying” ever uttered. “Three Cigarettes In An Ashtray”, too, is truly tragic, as Patsy wails her heart out in a smoky, empty room lit only by sparse chiming guitars and soft backing vocals. That’s a continuation of the implicitly nocturnal theme found on “I Can’t Forget”, with its quiet, intimate piano and sleepy rhythm guitar laying contentedly atop the angelfeather bed conjured by the backing choir. Patsy herself, sadly, enjoys no such contentedness – she’s still up, bathing in the meagre light of a fading fire, sadly reflecting on her lonesomeness. Even amid the comfiest domestic bliss a set of instruments and a choir can evoke, she gets no rest.

That nocturnal theme is finally made explicit on the album’s big, famous standout, “Walkin’ After Midnight”, which is far more evocative and atmospheric than a two-and-a-half minute song about loneliness has any right to be. It’s got a lovely, meandering slide guitar riff and a bit of a doleful rhythm, but most of that atmosphere comes from the echoey resonance of Patsy’s voice and the painterly fullness of the lyrics, sketching a fulsome picture of an emotional state rent between lonesome anguish and the tranquil peace of midnight solitude. “I stop to see a weepin’ willow/ Cryin’ on his pillow/ Maybe he’s cryin’ for me”, she sings, drawing out the last syllable into a mournfully climbing peal of despair. As someone who finds very little in the world as relaxing as being alone at night, I relate; I just hope I never experience pain like this. What was it Young Thug said? “I ain’t never been in love, I don’t know how pain feels”? If this is what love leads to, maybe he was right about it all along.

There isn’t a bad song on the album, but I guess I have to concede that “Walkin’ After Midnight” is the only really big standout. “Then You’ll Know” is so gorgeously tranquil that it seems to make time itself stop when one listens to it, but I’ll freely admit that it kind of disappears fairly easily from the memory after it’s done, as do most of these. It’s a great album, but ultimately it’s not a masterpiece and it’s far from the best country album I’ve ever heard. Still, come on – ninety whole ratings, RYM? Ninety? This lady deserves so much better than that. I’ll do what I can to correct this grave collective error myself over the coming weeks.