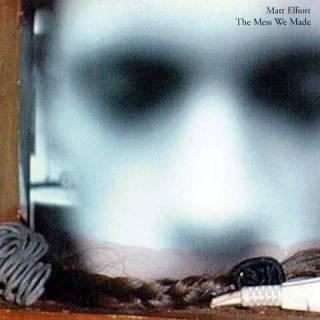 Labels such as “incredibly sad” or “probably the saddest album ever” were stuck upon The Mess We Made like they’ve been welded. The album was also labeled as an electronic music album by a dark folk guitarist and singer from England. Too many labels, huh? And pointing to the same sad thing. I braced myself.
“Let it play, already!”  – My mind screamed.
However, when I first listened to the record, I didn’t find it as depressive as it seems. Strange. It was the right moment, the mood was there. After waiting for a while, I opened a beer at a particularly cloudy dawn.
“Let it play, again!” – I needed to try once more.  And I did.
Matt Elliott’s oeuvre is an amazing piece of art. Technically, he’s amazing. Complete instrumentals, be it either creative riffs who never get too much repetitive or cohesive melodies whose progression and tempo flows like a cold winter breeze. Yeah, the labels were kinda right. It is, by all means, a completely sad record. It was imagined that way, designed that way, recorded that way. I can picture Mr. Elliott reminiscing at a particularly cloudy british day, lazily strumming his guitar and getting ideas for those melancholic riffs and vocals. Lyrics point to the same place as well, always full of loneliness and regret but, as every sad album should have, there’s the “light at the end of the tunnel” in the track “The Sinking Ship Song”.
Full instrumental tracks, distorted vocals, melancholic lyrics and melodies are the labels I give to The Mess We Made. Strangely, a potential candidate to “the saddest album ever” didn’t made me sad. Instead, I found myself thinking about what inspires Elliott to compose like this, to express himself that way. I checked some of his other works and these moods were there over and over again. Regardless of the themes, his contemplative melancholy seems omnipresent like he is a man with one single intention, to pass these feelings on. After all, art is supposed to make you feel something, right?