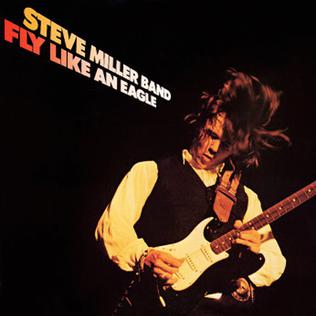 Steve Miller’s Fly Like an Eagle is supposed to be a “space blues” record from the 70s. While I don’t know exactly what “space blues” is meant to sound like, I’m pretty confident it’s not like this album. The only “space” element here is the trippy synth intro; nothing else feels spacey to me. And the “blues” part? Well, you know when a power pop album might have a single blues track to add some variety? This one has 4 or 5 of those, but they’re still blues as interpreted by a pop-rock artist, and not really pure blues or even blues-rock.
With failed expectations out of the way, this album sounds very much like it belongs in the 70s, which is good for a fan of that decade like me. While there’s an effort to give every song a nice melody, none are really stellar. The main problem here is the overall tameness of the rock and blues attempts.

Take “Mercury Blues”, for example: it manages to update an old blues song structure to the 70s quite nicely, but lacks any grit whatsoever. The two blues tracks in the end aren’t bad, but they seem like an afterthought, filler if there ever was any. “Rock’n Me” is actually embarrassing. It tries to emulate the blood-pumping guitar  style of Townshend and Hendrix, but it’s so mild, it’s like one of those “parkour fail” videos on the internet, where the person tries to jump from a rooftop onto another and falls in the middle. This is made worse when you consider Steve Miller was godfathered by no one other than Les Paul himself, and was supposed to be a great guitarist. Well, if he was, he certainly didn’t show it here. The guitars were unimpressive throughout the album.

That’s not to say there aren’t good songs here. The title track is very funky, with a catchy chorus. “Dance, Dance, Dance” is a country song that has the kind of energy this album could’ve used more of. The Sam Cooke cover “You Send Me” is the strongest point; it couldn’t have been otherwise given the differences in the songwriting capabilities of the two of them. It is sung in a way that makes it clear that the singer loves the song, and that makes it even more endearing to me. The best Steve-Miller-penned track here is “Take the Money and Run”, a piece of power-pop in the best Badfinger style and backing vocals stolen from “Sympathy for the Devil”. Fly Like an Eagle is much better when it does full pop than when it goes halfway blues.

In the context of all those great 70s albums, even when you just consider pop-rock ones, it won’t stand out too much. It should never appear on a best-of-the-decade list. But that is more of a testament to the amount of good stuff that appeared in that time, not that Fly Like an Eagle is bad or weak. I’m glad I’ve came across this album, a very pleasant listen.